“The time has come,” the waves had said,

“to move on to bigger things;

with shoes, and sticks & surfboard bags;

to where the sea is boiling hot, whenever pigs have wings.”

Pacasmayo, here we are! We decided to stay at Hotel Pakatnamu, a bright yellow seaside accommodation. This vintage “resort” was our motocombi driver, Johnny’s, recommendation. The hotel was ours, as we were the only guests! The vibe, though antiquated, fit the tranquillity of Pacasmayo’s pace. We were ready to find some action and our driver could sense it. He suggested we all go to El Farol, the beach break by the lighthouse.

Pictured here is Johnny’s moto. The motocombi or tuk tuk is quite an exhilarating form of travel. They vibrate so much it tickles your bones & they are painfully noisy. Johnny drowned out the whining engine by blaring Bob Marley.

“Don’t worry, about a thing, cause every little thing, is gonna be alright.” 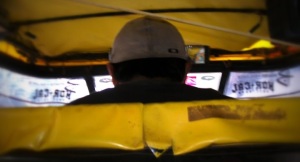 Those words soothe everything. All of my fear simply rolled off the rocky cliff and dwindled away with the reggae melody.

At the beach, we were not alone! What appeared to be a heavy local vibe, turned out to be a group of Brazilians. Logan joined them in the lineup and they were surprisingly accepting & encouraging. 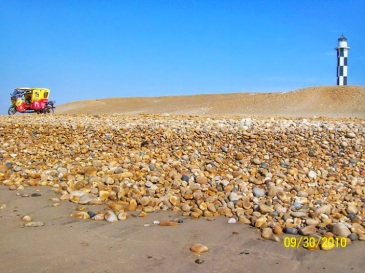 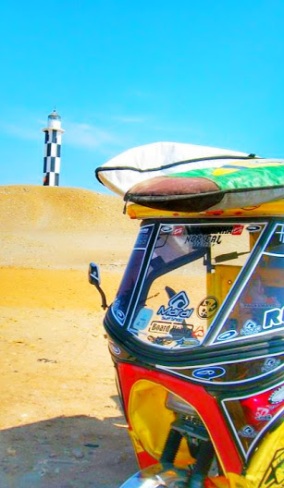 Everyone was hootin’ & hollerin’ & having a gay ole time!

After the surf, we headed back to our schmancy hotel room to rinse & rejuvinate. 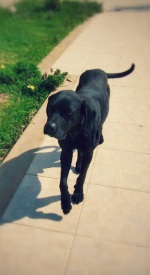 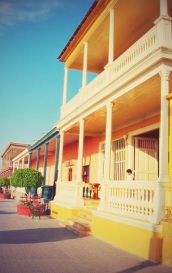 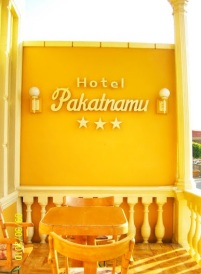 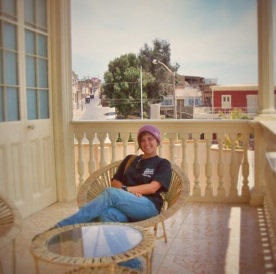 We beat the pavement, in search of food, but ended up eating a big plate of fried food at the hotel. After a heavy and filling meal of fried fish, fried potatoes & fried tortilla strips, we laid in bed.

The next morning we secured our exit strategy from Pacasmayo. We headed to the bus station to find a crusty old man, well over 80, running the joint. He sipped from a dirty mug & never made eye contact. He issued us bus tickets for the wrong day, so we had to extend our interaction. While he re-wrote our tickets, much to his chagrin, I assessed the “art” on the walls… It was a mix of full frontal pornography plastered up beside images of the Virgin Mary. A dichotomy indeed. Que interesante.

Our bus would not leave the city until 11:30 pm so we met back up with Johnny. He took us, along with a new Brazilian friend, to a secluded point break, Puemape.

At Puemape, the surf was heavy and rocky but quite lovely overall. It resembled a thicky, frosty east-coast Cape Hatteras swell. Logan followed Johnny out as the other dude psyched himself out by repeatedly voicing his concern about the dangers of the rocky point. “Peligroso,” he kept repeating… dangerous. In the end, only Logan & Johnny paddled out.

The big boys got their waves and were content. This area was void of people. There were a few abandoned buildings and an old church overlooking the break. Our only company was the fetid carcass of what once was a sea lion, bearing his teeth in the final moments of life.

Something you learn about while spending time in the desert of Peru, is that without constant maintenance, this place would simply disappear in the blink of time’s beautiful eye. There is so much wind, dust & sand but the people coexist, as they have for millennia. As they say, God formed man from this very dust of the ground.

We are all just creatures of the great cosmic dust; flecks of light in a sea of darkness.

Back to civilization we went, in search of pizza. No pizza to be found, only the traditional Peruvian fare, ceviche, mariscos o pescado. We slid into the next restaurant, called Aruba, which was slam-jamming with locals. We waited a couple of minutes for the next available table. The server was busy and spoke fast with an unrecognizable dialect. I pointed to some fried rice at a neighboring table. Along with the fried rice we were served my favorite little corn nuggets, las canchas/canchitas, juice & goat meat soup.

We scooped up some goods at the pharmacy and scored a couple of t-shirts. They guys paddled out again at El Farol. I still had my heart set on pizza though, so in the evening we went on a pizza pilgrimage. Johnny & Tomás, the Brazilian, joined us in search of our pizza mecca. We found the holy pie and it was both delicious and hilarious. The laughs were due to the language barrier, which is always a good time; lots of hand signals, onomatopoeia & overacted gestures.

Tomás kindly treated us to dinner and even let us chill in his hotel room until the time had come to depart from Pacasmayo and seek out the legendary land of Lobitos.

One thought on “A Place Called Pacasmayo: Chapter 6”

Sweet moments @ellugarayampe 🐝 🍯💕 Special thanks to @dnr3 & @amaz1981 for protecting la naturaleza
Summer in Ayampe 🌺 El verano en Ayampe 🌞 2022 flashback ... Hasta pronto 😃
Sundown in the land of the moon many moons ago. ✨🌞🌊 #ellugarayampe
Pozole verdre estilo Guerrero con chicharrón y salsa de chile de árbol 🌶️🐖🌵 Gracias por la receta @chefrickmartinez (His cookbook 'Mi Cocina' bout brought me to tears with it's beauty) #querico #comidalatina #picante
Ask me about your dream vacation! Come stay at the villa in Ayampe to get away from it all... 🌺🌎🌊
The 🌺 hibiscus 🌺 flower lifts spirits and brings good fortune to the home 🏡 This yellow beauty symbolizing WELCOMING & JOY. 🌟💛😃
Loading Comments...
%d bloggers like this: